A Brown University researcher turned to ETEL and HEIDENHAIN for the power and precision he needed to simulate the cause of one of nature’s most powerful forces in the lab.

It’s been a passion project of Dr. Terry Tullis, an Emeritus and Research Professor in the Department of Earth, Environmental and Planetary Sciences at Brown University: gaining a better understanding of the mechanics of earthquakes. 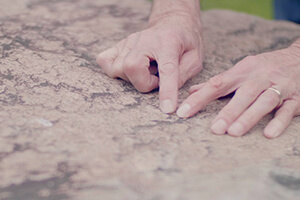 While we can use a seismograph to measure seismic activity and the Richter Scale to report its magnitude, simulating—one of the most effective methods of scientific study—seismic activity on a proper scale proves much more difficult. This has been Dr. Tullis’ focus.

“We have a pretty good idea of how earthquake waves are generated, but there are still a lot of questions about exactly how earthquakes behave mechanically,” Dr. Tullis said. “If we understood that better we’d be in a lot better shape to understand all kinds of effects of earthquakes.”

He went on to explain the basic mechanics: Major faults exist at the boundary between tectonic plates; as plates move, the faults don’t; elastic stress builds up and eventually the faults slip. 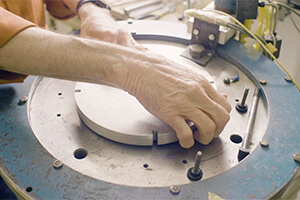 Since 1980, he’s worked to engineer a mechanism capable of recreating this slippage and acceleration. His high-pressure, rotary-shear machine slides a ring-shaped rock sample across another stationary sample inside a pressure vessel, in an effort to observe shear stress, friction, temperatures and velocities in line with what happens in nature.

His machine has been operational for more than 35 years. One of its two drive systems, until recently, used a 7.5-kilowatt (ten horsepower) hydraulic rotary servo motor capable of slip speeds of about ten millimeters per second, but faults move at a much faster one meter per second.

“I decided that we needed to slide faster to answer a lot of the questions we still had,” Dr. Tullis said. “I had the idea of using a servo motor, but the one I picked was much too big to fit into the space of my machine. It would also have to be offset from the main drive of the sample and connected with a belt.”

A proper retrofit is crucial to the success of Dr. Tullis’ research. While other friction experiments have been successfully conducted at these slip speeds, no other mechanism can replicate the high-pressure environment of earthquakes; the machine is capable of mimicking pressures found at a depth of about five kilometers (around half that of where a normal earthquake occurs), and since the machine applies rotary motion, the samples can continue to spin and more closely simulate the longer distances faults move during earthquakes.

Backed by a grant from the National Science Foundation, Dr. Tullis set out to find a motor assembly that could provide the necessary power and feedback in the space available without adding too many moving parts. He called several suppliers, talking with engineers and salespeople about their feedback and motor options, but none were quite right. It wasn’t until a call with a representative from a prominent lathe builder who was familiar with HEIDENHAIN and ETEL that he became aware of the solution. 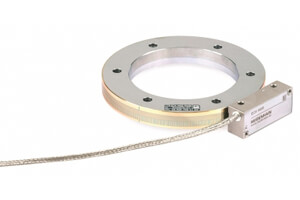 After some discussions with ETEL, the TMK0360-150-3ULS appeared to fit the bill. It’s a specialty high-speed, frameless torque motor with staggering capabilities: 100 kilowatt (135 horsepower), 1,820 RPM involving a peak torque of 2,270 newton meters at speeds of up to 400 RPM, beyond which it delivers progressively lower torques up to the 1,820 maximum RPM. The torque capability will allow sliding samples with typical friction values at normal stresses up 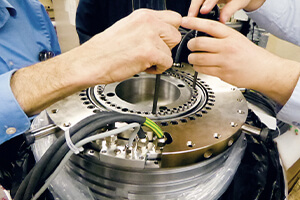 “It is just perfect in terms of its torque capability and speed capability so that I can hook it up with a direct line connection to my sample,” Dr. Tullis explained. “I don’t have any belts or gears. It’s the ideal solution.”

Of equal importance to the successful retrofit was that the ETEL motor assembly fit seamlessly with an encoder from sister company HEIDENHAIN, a component designed specifically for use in high vacuum settings. The 70mm ECA 4000 absolute angle optical encoder will sit inside the rotor and provide primary feedback to the control with 27-bit resolution. Ultimately, it’s this combination of the motor’s power with the ability to control, and thus measure, the sample motion down to nearly as small as one billionth of a meter—100,000 times smaller than the diameter of a human hair—that makes the next generation of the machine possible. 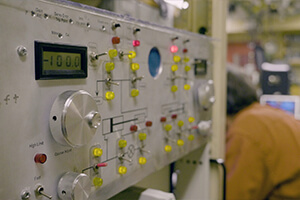 “Now we can pretty much slide at the whole range of speeds that faults actually slide at in the Earth,” Dr. Tullis explained. “There are 10 different mechanisms, or more, that may cause friction weakening at high speeds. We’ve been able to investigate some of them at lower slip velocities, but there’s a big difference between what we could do before and what we can do now in terms of frictional heating, weakening and melting.”

Once the machine is reassembled with the new motor, the next steps will be to identify sealing materials that can withstand temperatures that will reach hundreds of degrees Celsius in some areas of the sample assembly and to configure a controller capable of working at these range of speeds.