Different Types of Encoders and Their Applications

Encoders play an integral role in almost every mechanical system that involves motion monitoring or control. There are a variety of types that work with different kinds of motion with different options for how they detect and communicate. Let’s explore some of the foundational elements and variables in the world of encoders:

What Does an Encoder Do?

When it comes to motion—speed, distance and direction—feedback systems, encoders of one type or another are typically at the core of the operation. Put simply, they record movement metrics and communicate them in a way that a control system and/or person can use to adjust or monitor. 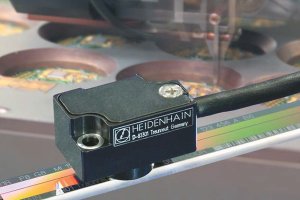 The Most Common Types of Encoders

Encoders are most often used to measure linear or rotational motion. Everything from how they are constructed to the signaling method can vary based on their environment, application and budget.

These measure straight-line motion. Sensor heads that attach to the moving piece of machinery run along guideways. Those sensors are linked to a scale inside of the encoder that sends digital or analog signals to the control system. 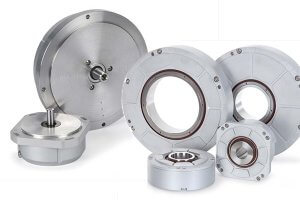 When deciding on a rotary encoder for pairing with a motor, an engineer must consider the five key encoder properties that have the largest influence on motor performance: positioning accuracy, speed stability, audible noise, power loss, and bandwidth. Read more about what to look for here. 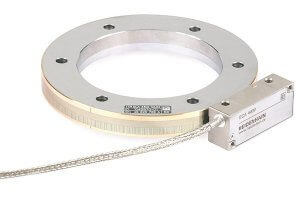 Similar to their rotary counterpart, angle encoders measure rotation. These, however, are most often used in applications when precise measurement is required. HEIDENHAIN offers angle encoders with accuracy down to ± .04″ (arcseconds) and resolutions up to 29 bits.

Generally, encoders all do the same things, but the technology they use to do it can vary. These variations usually have the most impact on the detail and amount of feedback they provide. There can also be differences in how encoders are constructed based on the environments they are intended for.

The Difference between Absolute and Incremental Output

Incremental encoders measure in relation to a starting point. Every time a system is turned on a new zero reference point is established, or a new one will need to be reestablished by the user. Markings or steps are spaced equally apart on the scale, or disc in the case of rotary encoders. The encoder generates a pulse-like signal based on each marking, which is translated to a signal.

On the other hand, absolute encoders recognize a distinct location at all times. It’s not relative to another and there’s no need for reestablishing a zero point. Instead of equally spaced marks, distinct tracks or markings transmit a unique code at each location to a serial control.

The Difference between Magnetic and Optical Encoders

How encoders recognize and process the various coding or markings is different. Magnetic encoders use the relation between static and/or dynamic magnetic fields or distinct tracks and translate those into signals. The other common design is optical, which uses light that’s passed through glass and recognized by a receiver. Magnetic assemblies are generally more simple, compact and durable, while optical encoders are extremely accurate and able to function in areas with other magnetic forces.

The Difference between Sealed and Exposed Encoders

Encoders are critical to the proper function of their mechanical system. The slightest inaccuracy or malfunction can cause a significant ripple effect on whatever the larger operation may be. Those systems and operations take place in widely different environments, from machine tools where coolant and/or metal chips may be moving around at high speeds and pressures to sterile medical labs.

Sealed and exposed encoders provide options that suit whichever type of environment in which they’ll be deployed. Sealed encoders encase the most delicate components of the encoder, protecting them from whatever contamination may be present. Exposed encoders take up less space, generally excel in high-speed scenarios and are often deployed in high-precision measuring applications.

Encoders are critical components in all kinds of mechanical systems. They are especially prevalent in industrial settings where large machinery performs repeatable tasks, high-precision prototyping or delicate work.

Encoders for the Electronics Industry

Encoders are critical to the production of advanced electronics, one of the fastest growing and advancing industries in the world. Rotary, angle and linear encoders are all used in one form or another in the electronics sector. Encoders of the highest accuracy and resolution are often the choice considering the small work areas and components—especially when it comes to semiconductor fabrication.

Vacuum environments are also common in electronics production. Encoders, including angle and linear, need to be built specifically for the unique ventilation, gas and temperature conditions that come with work in a vacuum.

CNC machines must maintain position in the face of heavy workpieces and spindles, multi-axis movement and high speeds. Encoders play a huge role in all of the components working together to mill, drill and bore correct parts. We also develop a full line of popular control systems and touch probes used to program CNC machines.

In 2018, we worked with Major Tool & Machine to help rebuild one of the largest machine tools in the world. Custom linear encoders were developed to accommodate the gantry mill’s staggering axes travels: the X axes alone measured 740 inches each. 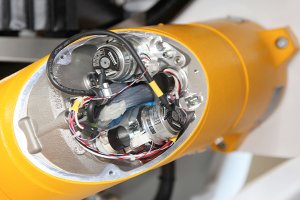 The automation industry is booming, and it couldn’t be without capable encoders. Robotic arms, like this one developed by grinding machine company, Strausak, are ubiquitous in manufacturing environments. Any unmanned mechanical systems will rely on consistent and accurate motion and measuring.

Encoders are also being used to automate transportation as with Sweden’s high-speed train, the SJ3000, which employs a custom-made, absolute MC 400 encoder from Leine Linde. It helps operate a redundant system that controls the train’s speed and braking automatically if necessary.

If you’re looking for encoders for an automation application, use our product selector tool to narrow down your search.

Encoders in the Medical Industry 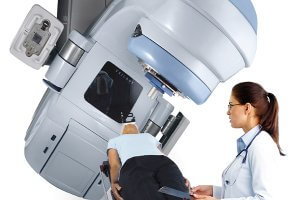 Encoders are prominent in the medical industry because of the precision necessary to accurately and safely test and treat the human body—and develop new procedures in the lab. For example, you’ll find HEIDENHAIN LIC 2100 exposed linear and ECN 1123 and EQN 1135 rotary encoders used in CT and MRI scanning machinery for help with precise imaging and patient safety. Radiation therapy is another application that requires precise linear and angular technology with no room for error.

It’s also exciting to be able to say our LIC 4000 linear and EQN 1023 absolute rotary encoders are used in one of the most advanced breast cancer treatments in the world. The GammaPod™ by Xcision Medical Systems is billed as, “the world’s first stereotactic radiotherapy system optimized for treating breast cancer.”

Whether it’s an articulating arm that picks and places equipment in a manufacturing plant or more mobile, automated, guided robots, they all use encoders. By their nature, automated systems need these effective speed and positioning feedback systems to function with limited human assistance. In many cases, encoders with a small profile are best suited for a robotic design, so that all the required technology can fit together in a robot that’s sized appropriately to its use. The RENCO R35i and RCML 15 rotary encoders, for example, have height profiles of only 14 and 8.9 mm respectively.

Encoders all serve the same general purpose of measuring motion and signaling feedback, but their configurations, capabilities and applications vary widely. They have played a significant role in almost every facet of life, especially industrial and technological pursuits. And that won’t be changing any time soon.