Home News & Resources Did You Know That TNCs Were Used in Replication of a Large-Scale Model Locomotive?

Did You Know That TNCs Were Used in Replication of a Large-Scale Model Locomotive? 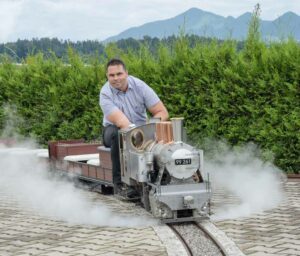 Wolfgang Wimmer demonstrates the performance of his LAG 64.

You can see the enthusiasm on the faces of the employees of Wimmer Maschinenbau GmbH & Co. KG in Übersee on Lake Chiemsee, Germany. The reason is the successful completion of an exciting job: the 1:5 scale replica of an attractive steam locomotive, the LAG 64, of which only one original was built by J. A. Maffei. To date there is no knowledge of any other replica of this unique locomotive.

Not only in traditional model and mold making have HEIDENHAIN TNC controls earned their reputation for combining particularly easy operation with very high accuracy. The model making that we are talking about here gets the hearts of large-scale model railway fans racing. The Walhallabahn put the steam locomotive LAG 64 into service in 1926. With a track gauge of 1000 mm the so-called “Vierkuppler” (four coupled axes) first transported sightseers and later also goods. Hans-Peter Porsche will use the replica in his TraumWerk (Dream Factory)—a museum and theme park in Anger, Germany, not far from Salzburg, Austria. The model had to look as authentic as possible and also function like the original: An extraordinary challenge for the Wimmer engineering specialists.

Faithful replica in appearance and function 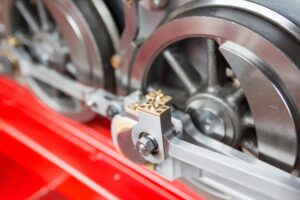 To ensure that the locomotive doesn’t run out of steam even on long trips, the team at Wimmer wanted to reproduce the operation of the LAG 64 as faithfully as possible and optimize it for service as a ridable miniature railway. A demanding task, considering that all they had to go on were an original assembly plan with three main views and a few pictures. Months of research were required to properly understand the mechanical functions like drive control, valve regulation and valve timing. Old manuals like “The Steam Locomotive Service Guide” and other historical sources provided valuable information about the design. Markus Maier: “We first had to understand the workings of a steam locomotive ourselves. In doing so we discovered the outstanding design and metalworking of the time—all without CAD and controlled machine tools.”

Markus Maier set up the steam locomotive with all its components in the Solid-Works CAD program. The programs for the complicated machining with the iTNC 530 were created with the HypderMILL CAM software. From the outside the model is an exact scale replica of the original. However, the internal works had to be changed. Managing director Wolfgang Wimmer: “Hot exhaust gases cannot be reduced on a scale of 1:5. We therefore had to adjust the scaled-down boiler tubes to the physical reality. Nevertheless, it all operates as closely as possible to the original.” 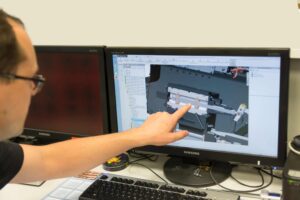 Markus Maier shows the setup of the cylinder in the CAD system.

The wonderful model consists of over 5400 parts, 1061 of which were manufactured by Wimmer. Many of the components with simple geometry were programmed directly on the iTNC 530 or the MANUALplus 4110 lathe control. Machine operator Markus Ager: “Setup and datum setting were easy with the touch probe cycles.” For machining the workpieces “we very often used Cycle 22, ROUGHING, and Cycle 23, FLOOR FINISHING. The PECKING cycle made manufacturing the steam cylinders so much easier.”

The team made the devices needed for manufacturing themselves—including the molding die for the copper steam domes, which was produced with 5-axis simultaneous machining.

In addition to the choice of high-quality materials for a long service life, Wimmer set great store on the safety of each functional group. The department responsible for steam at the Munich TÜV (German Technical Inspectorate) had to test and approve the boiler prior to manufacture. The TÜV also tested and approved the steam boiler upon completion.

Perfect function was worth the effort

The fully assembled locomotive bore witness to the team’s extraordinary performance: The first time it was filled and fired, the locomotive set itself in motion immediately—everything fit and functioned perfectly. Everyone involved still enthuses about this maiden journey.