The Importance of Thermal Protection for Torque Motors

When talking about high-end machining or manufacturing applications dealing with direct drive technology, one of the biggest key advantages of going with this particular transmission method is its endurance. Because of the nature of direct drive motors, they are able to operate at peak performance levels indefinitely without any kind of wear or aging as long as the motor isn’t pushed past its capacity. Unfortunately, because this isn’t a perfect world, unexpected things can happen which can cause the motor to overheat. Whether it is through a parameter being input incorrectly or an unexpected external force causing more resistance than expected, it is important to have certain forms of thermal protections put into place. Since torque motors are built in a way where they cannot be effectively repaired, it is vital to prevent any overheating so that buying a new one won’t be necessary.

There are currently a number of ways in which torque motors can be protected from overheating. They include having the controls monitor and maintain a certain amount of current, or using physical temperature sensors. Below discuses some of the methods possible to ensure optimum motor protection.

Within controls, the algorithms that monitor the current being used are referred to as an I2t value. There are variations on how 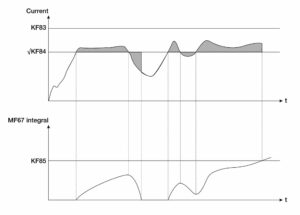 it is calculated depending on whose programs are used but the principle is always the same. I2t is an algorithm that is a function of time and current, so it uses the amount input into the motor over time and sets a limit on how much can be applied before overheating. To give an example of this, we’ll take a look at the I2t programming in ETEL’s AccurET control driver.

A value of KF84 is set, which is dependent on the model of the motor. As the amount of current used goes above and below this value, an integration starts to occur. If the current remains above the selected KF84 value for too long and the integral reaches its limit of KF85, then an I2T ERROR occurs. There is also an over current limit at KF83 which sets a limit regardless of any integration value.

Most drivers have some form of current monitoring methods to prevent overheating, and it is a way to use the motor’s continuous current value to prevent motor damages at the electronics level.

There are many types of motor temperature sensors used on the market but the focus here will be on common ones that are also used in ETEL torque motors.  They are KTY, SNM, and S01 sensors.

An SNM sensor is typically used in low-voltage circuits and is meant to be connected to a controller working at anelectronic voltage level typically around 5Vdc.  Like a KTY sensor, it outputs a resistance value based on the temperature but the change is a lot sharper.

An S01 sensor is a limit switch based on a bimetallic mechanism.  It is a digital signal that reads as either open or closed.  If desired, it would be able to directly cut off the power of some electronics in case of overheating since it operates as more of a “switch” rather than having a temperature/resistance relationship. It is able to operate in a medium to high voltage range of around 50VDC. 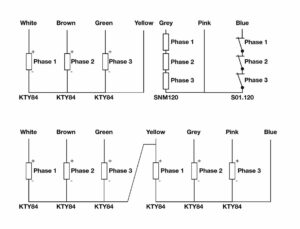 There are two kinds of standard temperature configuration ETEL utilizes for its torque motors.  The first is Configuration 8 which not only uses each type of sensor but has all three phases monitored.  Although the option for having all three sensor types isavailable, it is Configuration H that is recommended since there is a spare set of KTY sensors on each of the phases.  The importance of this comes from the fact that KTY sensors, while the most accurate of the different types, are Electrostatic-sensitive devices (ESD) and there are many opportunities in the machine assembly process where the sensors can be damaged.  Having an extra set ensures that it wouldn’t be necessary to have the entire motor replaced in the off chance one of them gets damaged.

It is important to note that in each of the different configurations, all three phases are monitored.  Not all motors have this setup because of the assumption that any overheating in one phase would be evenly replicated in the others.  A case where this wouldn’t apply would be under stall conditions.  In a machine tool duty cycle, where torque motors are commonly used, there may be an instance where a part is held in place for a certain amount of time and the current isn’t evenly distributed amongst all the phases. This is called a Stall condition. If one phase is found to be above an acceptable level and it’s not the one that has a sensor on it, then a user runs the risk of a phase overheating without the driver even being aware of it.  This is why monitoring all phases is important.

Usually when a project is in its prototyping stages, not all of the demands of the applications are fully known.  Because of this, when the time comes to select a motor, sometimes an option that has more power than what is necessary for the application is selected.  This is usually done in order to allow room for any unexpected forces that would cause the motor to overheat.  Along with that, the motor could be restricted from going past a certain temperature that is well below its max, or not be allowed to reach its listed average current value.  This is because since there is a delay in the KTY sensor output, these measures are put in place to anticipate overheating before the motor gets damaged.  The downside of these limitations is that the motor is unable to reach its full potential and could be larger than what is necessary.

Depending on the level of how over-sized the motor is, it may turn out that another, smaller, and less expensive motor is able to complete the same task.  If it is discovered that by letting a motor reach values closer to its limit, a replacement can be chosen and end up saving a customer money in the long run.

In order to eliminate a lot of the safety measures that would limit the potential of a selected motor, ETEL developed the IMTHP.  The IMTHP is a thermal module developed for torque motors which takes the inputs of the three KTY Sensors and provides a corrected analog temperature signal, allowing the user to have a precise and continuous monitoring of the actual temperature in the motor.  It then takes these readings and uses its own algorithms to determine if the temperature is on track to reaching an overheating point by outputting a simple digital warning/error signal that can be used without complex data processing on the controllers part, and have the machine properly react if any problem is ever detected.  This was developed as a way to overcome the delay in the KTY sensor reading so that an overall more accurate and precise temperature reading could be monitored. The IMTHP also provides galvanic insulation to protect the machine cabinet in case of a critical overvoltage defect.

Overall, the biggest advantage of the IMTHP is that it allows the user to eliminate a lot of the previously mentioned safety measures (such as limiting the current and operating temperature) and run the motor at its full potential with minimal over-sizing.

Multiple temperature monitoring methods have been discussed here, both physical and programmed, and each of those serves the purpose of preventing the motor from overheating and getting damaged.  As anyone purchasing a machine would know, having an important element of the machine break and cause a machine down would be a nightmare for anyone who relies on continuous operations.  Being aware of these potential issues, ETEL has not only fine-tuned these methods for their own products but has also developed new methods, such as the IMTHP, to provide an extra degree of protection.  Having everything fine-tuned not only keep the motor, and as a result the machine’s operations, fully functioning, but also allows the user’s product to perform at its peak, ensuring the best efficiencies possible and an overall high quality machine.