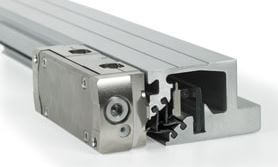 For years now, HEIDENHAIN absolute linear and angle encoders have been the product of choice for machine tools wherever high requirements for accuracy, reliability and productivity must be met. With the absolute measuring method, the position value is available from the encoder immediately upon switch-on and can be called at any time by the subsequent electronics. There is no need to move the axes to find the reference position. This absolute position information is read from the scale graduation, which is formed from a serial absolute code structure. Because of the advantages of absolute encoders, HEIDENHAIN is now producing them in larger quantities than the incremental versions.

Higher technical requirements in machine and plant manufacturing as well as more stringent safety requirements in national and international standards have necessitated a new generation of sealed linear encoders that are now being introduced to the market.

The heart of these new encoders and the fundamental innovation is a HEIDENHAIN OPTO-ASIC that was conceived from the experiences of these last 15 years of R&D. Thanks to the integration of optical elements, analog circuits and digital signal evaluation on a single chip, the signal quality and reliability have again been significantly increased. Functions permitting operation of these encoders in safety-related applications have also been integrated in the OPTO-ASIC. This means that the absolute linear encoders of the LC 115 and LC 415 series with functional safety (as single-encoder systems) achieve SIL2 in accordance with IEC 61508 and performance level d of ISO 13849. The safe mechanical connection required by the standards has also been realized.

With a rapid formation of the position value within 5 µs and a resolution down to 1 nm, there are no limits to their possibilities on machine tools. Along with encoders for the RS 485 interfaces, such as EnDat 2.2, FANUC and MITSUBISHI, there are also encoders for the Ethernet-based interface from SIEMENS.

HEIDENHAIN considers ASIC design, ASIC qualification and all modern manufacturing methods, such as COB (chip on board) or flip-chip assembly to be essential expertise that is not to be outsourced. This high manufacturing depth and the cooperation of interdisciplinary processes with mechanical and electronics R&D at one location is the basis for the high reliability of series production of absolute and incremental encoders by HEIDENHAIN.

Makeup of the encoders

The scale of the absolute linear encoders, which are offered in the full-size and slim-line versions LC 115 and LC 415, respectively, consists of a 20 µm incremental grating and an absolute grating with serial Pseudo Random Code (PRC).

Figure 1: Representation of a code structure with additional incremental track

The incremental track is scanned with the proven single-field method. This type of scanning distinguishes itself dramatically in its signal quality and signal reliability from the three- or four-field methods.

The large scanning area over the entire width of the scale grating and the arrangement of several scanning fields in succession make the encoders with single-field scanning extremely insensitive to contamination. The results of corresponding contamination tests prove this: even if large areas are contaminated, the encoder continues to provide high-quality signals. The position error remains far below the value specified for the accuracy grade of the encoder.

Figure 2: Influence of contamination on the output signal (in this example, from an LS 487).
Left: four-field scanning, right: single-field scanning

A proven technique from absolute rotary encoders, but new for linear encoders, was adapted to produce the absolute encoder signals. The individual PRC bits are scanned “differentially.” Each bit consists of a dark and a light field. Similar to the differential data transfer of an RS 485 interface, disturbances influence both fields and have only a slight effect on signal processing. The combination of both technologies makes it possible to attain a very high signal quality and reliability.

Safety is becoming increasingly important in machine and plant construction. Proof of this can be seen in new legislation and in the heightened safety requirements of national and international standards. These high requirements mainly serve to protect human beings, but material assets and the environment are also receiving more consideration.

In order to fulfill the high requirements placed on the measuring technology by the new standards, HEIDENHAIN and TÜV-Süd together subjected HEIDENHAIN’s safety concept to  type examination. The certification applies to the complete system—from the formation of the position value over the data transmission to the evaluation in the subsequent electronics. The fault exclusion regarding the mechanical elements coming loose is the finishing touch in this consideration. The new absolute linear encoders of the LC 115/415 series are the first linear encoders that can provide the OEM with a PFH value for consideration of the complete system. The number of encoders available with functional safety will increase gradually. Certification of the RCN series of angle encoders is planned for 2012.

The productivity of a machine tool is determined by its accuracy (whether it can safely manufacture the required part quality), the dynamics (in what time) and the availability. The new LC encoders set standards in all three requirements. The attainable accuracy was already described above. With regard to dynamics, the permissible traversing speed of 3 m/s and a maximum acceleration in measuring direction of 10 g should present no limit for linear motion.

The use of filtered compressed air together with linear encoders provides a maximum of reliability. This produces an overpressure in the encoder and prevents the ingress of dirt and liquids.

LC 211—absolute even over lengths
up to 28 meters

On long machine-tool axes, the LC 211 sets new standards in linear measurement. The successor of the well-known multi-section LB 382 linear encoder now provides the advantages of absolute position acquisition for measuring lengths up to 28 meters. The LC 211 uses the above described new OPTO-ASIC, however with a changed beam path, because here the measuring standard is a steel tape instead of glass. This METALLUR steel tape graduation—known from the LB 382—with a 40 µm incremental track and a PRC track consists of a highly reflective gold layer and light-absorbent grating lines. The scanning provides unique absolute position values over the entire measuring length at a resolution down to 10 nm. The long measuring lengths of up to 28 m inevitably necessitate long cables. Serial data transmission is particularly advantageous for such applications, since, for example, the signals from a 1 VPP interface have a significantly lower useable component as a result of the long cable lengths. In comparison, the serial interface transmits the data without loss, regardless of the cable length. Just like the LC 100 and LC 400, the LC 200 will have protocols for the EnDat, FANUC and MITSUBISHI interfaces.

To facilitate mounting of such a long encoder, a new mounting technique was developed for the LC 211. The seals are premounted on the sections, which are up to 2 meters long, and are designed to provide a tolerance of up to 2 mm in measuring direction during mounting. However, it is essential that the mounting tolerance for the overall measuring length be maintained in order for the clamping mechanism to function correctly. The new mounting strategy significantly reduces the time required for mounting, and at the same time increases the quality and reliability.

The new sealed LC 115/415 linear encoders are more accurate, more reliable and safer than ever before. The combination of single-field scanning and digital signal processing provides high-accuracy absolute position values. The double sealing lips improve resistance to briefly contaminated compressed air. Certification by TÜV makes a single-encoder system possible with safe, purely digital, absolute position values. The LC 211 adds large measuring lengths up to 28 m to the product program. All LC encoders can be used with EnDat, FANUC and MITSUBISHI controls. The LC 1×5/4×5 series can even be connected directly to the SolutionLine control from SIEMENS.