Machine tools for the manufacture of large parts for the space and aeronautical industry, for construction of large turbines, or for large dies in toolmaking, all have at least one long servo axis. On these machines, axis lengths of several meters are nothing out of the ordinary. Absolute encoders, which provide the position value immediately after switch-on, are therefore growing ever more significant because they obviate a reference run in the axes. A new absolute linear encoder from HEIDENHAIN for machine tools with axes up to 28 m (92 ft) in measuring length now sets new standards, because up to now only one linear encoder in incremental design—the LB 382—has been available on the market. Beyond that, the goal is to certify the product as a single-encoder system for safety-related applications up to SIL-2 (EN 61 508) or PL d (EN ISO 13 849).

The new LC 200 is a multi-section encoder consisting of a parts kit with parts built to length, such as a scale tape, bearing strips and sealing lips. There is also one or more scanning heads and the scale tape housings needed to enclose the device. The LC 200 can be mounting to the same mating dimensions as the LB 382 incremental encoder. 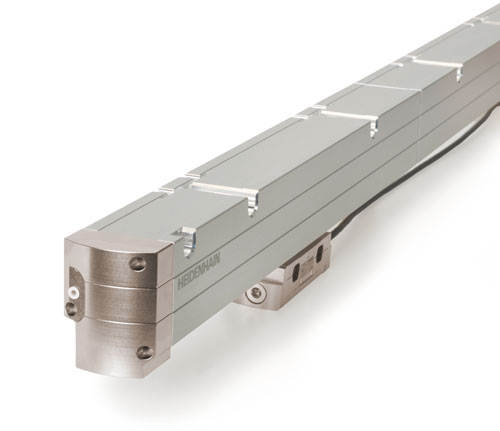 The measuring standard is a METALLUR steel scale that is scanned with the reflected light method. Even with large measuring lengths up to 28 meters, the position value is formed from only two graduation tracks. The absolute track with its serial code structure provides unique values over its entire length. The incremental track with a grating period of 40 µm is interpolated for the position value and processed in the highly integrated opto-ASIC into an absolute position value at the high resolution of 0.01 µm. Thanks to the METALLUR process it is possible to apply graduation structures with high edge sharpness and homogeneity onto the steel scale tape. That, together with absolute scanning according to the single-field principle using a highly integrated opto-ASIC enables the encoder to provide very high signal quality with very little interpolation error and at the same time an increased tolerance to contamination. 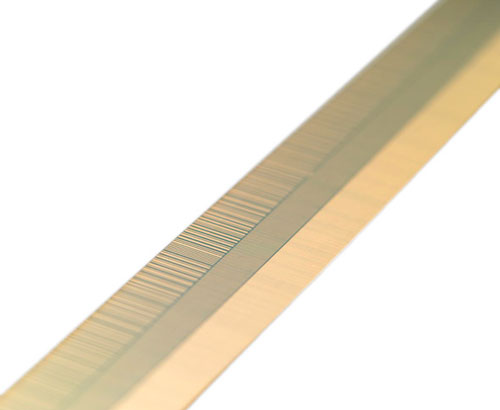 Many machine tool builders are addressing the trend toward increased performance and higher dynamics on machine axes by designing linear motors into these axes. The application of linear motors is subject to stringent requirements on signal quality, but also on the dynamics of the linear encoder. One important aspect here is the rigidity of the system in measuring direction. During the conception of the LC 200, the developers made sure to improve the system rigidity in measuring direction so that the encoder could also be used on linear motors. The compact design of the scanning unit now provides a 50% increase in rigidity in measuring direction, and at the same time a more than 45% increased resonance frequency over the LB 382 incremental linear encoder.

Minimizing the error at the housing butt joint is particularly important for multi-section encoders. During installation of the LC 200, the housing parts are mounted on the machine base and later the scale tape is drawn into the multi-section housing. To prevent position errors at the butt joints of the housing sections, the scale tape is always scanned in its stress-free zone. This effectively prevents any reduction in accuracy, even with dimensional offsets at the limit of the housing’s mounting tolerance

A new encoder housing was designed for fast and easy mounting. It was designed for dimensional compatibility to the LB 382 and improved mountability, but also for an improved guideway for the scale tape at the housing butt joints. The housings now feature one seal around the entire perimeter of the housing end block. The profiles can therefore be slid into each other easily and are completely closed by the embedded seal. 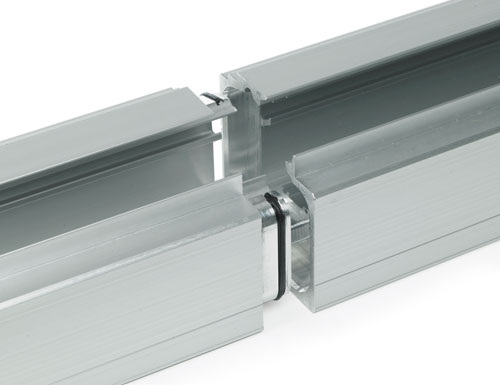 The LC 200 is also intended as a solution for position acquisition on long axes in safety-related applications. The goal is to enable the LC 200 to operate as a single-encoder system in conjunction with a safe control in applications up to control category SIL-2 (according to EN 61 508) or performance level “d” (of EN ISO 13 849). Reliable transmission of the position is based on two independently generated absolute position values and on error bits. These are then provided to the safe control. This is made possible by the purely serial EnDat 2.2 interface. Moreover, its purely serial data transmission over the EnDat 2.2 bidirectional interface also offers other advantages, such as greater reliability, improved accuracy, diagnostic capabilities, reduced costs through simpler connection technology, and other benefits. EnDat 2.2 with incremental signals will be available as an additional interface by the unit’s introduction.

The new LC 200 closes a gap in absolute sealed linear encoders from HEIDENHAIN for up to 28 m (92 ft) measuring length. Also, field-proven single field scanning results in higher accuracy and reliability from the LC 200. The new housing design of this multi-section encoder makes it possible to reduce mounting time. The result is a dramatically improved encoder that retains the advantages of the incremental LB 382 and, thanks to its cutting-edge technology, provides additional advantages for existing and new applications on long machine-tool axes.