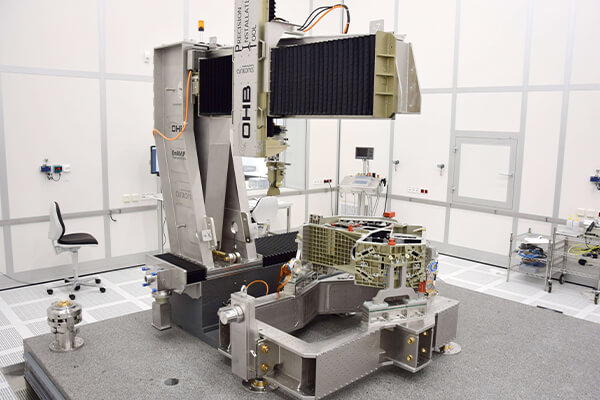 Encoders are feedback devices that measure and communicate position and speed across a system. They most commonly measure linear and rotary motion. Encoders may vary in their detection methods, including the use of optics and magnetics, as well as in how they signal the reading, in a closed- or open-loop circuit. These affect the accuracy, speed and format at which they deliver feedback and can be mixed and matched to fit the demands of the particular application.

The physical construction can also vary from sealed and rugged to protect delicate measuring hardware and bearings from harsh environments, to exposed encoders that operate in more controlled environments.

Encoders have long been a foundational component of many of the mechanical systems we use every day and the advanced ones we use to build them. In fact, at HEIDENHAIN, we developed the first precision measurement encoder in the early 1960s, affectionately referred to as the “Dome” or DOM (Digital Optical Measuring Instrument).

As technologies advance, the things we make get smaller and more intricate, and the pressure to get them made faster increases. In turn, encoders are in high demand, with those that deliver high precision even more so.

Industries Where Encoders Are Used

They aren’t taking over just yet, but robots are more applicable and effective in a growing number of areas and especially for use in operations like welding, material handling, assembly and grinding. Since there is typically limited human oversite or monitoring, these robots must have reliable encoders to help guide their movement.

One of Comau’s robotic welding system is a prime example of how encoders, along with the right controls, enhance capability. The pairing of our ECI 1118 absolute rotary encoder with our EnDat2.2 digital interface was the perfect fit for their advanced C5G control and 3D SmartLaser laser welding systems.

The ECI 1118 measures 262,144 positions per revolution (18 bit), ensuring drive system control at all speeds. The purely serial EnDat 2.2 digital interface allows for powerful control and diagnostics of the robot thanks to fast and secure data transmission at clock-pulse rates of up to 8 MHz for high drive dynamics. This facilitates a linear motor that can be accelerated up to 8 g and repositioning of the Z axis that’s 10x faster than standard robots.

Learn more about the importance of encoder interfaces here.

Strausak AG is another company exploring robotics, specifically how it can accelerate operator-free grinding and re-sharpening of tools. In this application, a gripper arm is used to pick tiny tools from tightly loaded pallets into the fixture and back. Every axis of the arm includes an inductive EQI 1100 rotary encoder. This encoder allows accuracy of 50 µm at the tip of its gripper for the safe, quick and precise placement of tools with diameters as small as 10 mm.

Another name for the concept of precision movement of robotic arms is “tool center point accuracy.” Here we discuss how secondary encoders, dynamic motor control and linear encoders factor into reliable robot performance 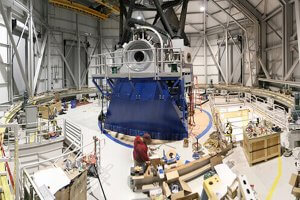 Viewing galaxies light-years away in the ever-expanding universe requires extreme precision in the alignment of horizontal (azimuth), vertical (elevation) and Cassegrain axes. Adding to the technical challenge, this level of precision is usually achieved through the synchronization of several moving parts.

The ALMA project in the Chilean plains, for example, gathers data from 66 interconnected receivers and processes it through the Alma Correlator, one of the fastest specialized supercomputers in the world. HEIDENHAIN encoders are used in many of the receivers for the precise control of antennas weighing several tons. ERA 7480 angle encoders with 247,800 scale lines and ERA 4282 with 32,786 were used to measure horizontal and vertical angles, respectively.

Similarly, the Discovery Channel Telescope (DCT) in Happy Jack, AZ relies on HEIDENHAIN ERA 880 tape encoders to control its axes movement for focusing its 4.3-meter aperture. Accuracy has been measured at 0.19 arc seconds on the azimuth, 0.38 arc seconds on the Cassegrain and elevation at 0.03 for 90-degree motion—all exceeding original specifications. Work done with the help of the DCT included a survey of the Kuiper Belt object orbiting the sun beyond Neptune, study of comets and small-galaxy structure.

Terrestrial equipment isn’t the only exploratory equipment that relies on encoders. The Environmental Mapping and Analysis Programme (EnMAP) measures solar radiation reflected from the earth’s surface, which is useful for everything from agriculture to water management. It includes five mirrors, six prisms, three cameras and delicate electronic components in an extraordinarily compact space.

Its construction required use of Europe’s largest clean room and the creation of a dedicated 2.5 ton apparatus called the IOU-PIT for precise component placement. Exposed incremental HEIDENHAIN LIP 581 encoders were used on each axis of the IOU-PIT with a baseline error of less than 0.175 µm over 5 mm intervals and with an interpolation error of just ±12 nm.

From the research and development of new medicines to diagnostics and treatment, encoders play a key role. As encoders advance in size variety and accuracy capability, they’ve helped expedite testing and make more advanced machinery and wearable devices possible. We know a few of these examples firsthand.

A disruptive device called the GammaPod™ is revolutionizing how breast cancer is treated. The motion includes safely moving the patient themselves and rotating radiation delivery that needs to be pinpointed to ensure it both hits its target and is dosed properly. There are five HEIDENHAIN absolute LIC 4000 large-traverse linear encoders for positioning the patient correctly and two EQN 1023 rotary encoders for the independent drive systems of the treatment delivery apparatus.

You can read about some of the biggest biomedical engineering trends here.

Programmable exoskeletons are used, in part, to help those with lower extremity weakness—even to help those with paralysis stand and walk again. It goes without saying that anything affixed to the body needs to move reliably and accurately. HEIDENHAIN’s line of RENCO rotary encoders—especially the RCML 15 with its low profile—are commonly found in these exoskeletons.

Few industries are as progressive or demanding as the semiconductors right now. The lithographic processing for semiconductor production requires the grinding of aspherical lenses up to 500 mm in diameter for extreme reduction. Needless to say, the grinding machines working with these mineral lenses need to be extremely precise.

Schüssler-Technik is one of the companies that specializes in the production of motors capable of the accuracy needed to machine lenses. Their HGE pulsation-free, iron-core (these deliver higher power density than ironless alternatives) torque motors are specifically suited for the challenging work. Schüssler-Technik uses HEIDENHAIN ERA 4000 modular angle encoders for its HGE motor. Since the encoder far exceeds standards, the lens grinding machine can be operated with remarkable 16,384-fold interpolation and with 24,000 lines on the encoder for efficient production of semiconductor elements.

Today’s machine tools often require extreme accuracy to achieve the fine finishes and tolerances while working with ever-shrinking components. What’s more, while these machines have long used encoders to move their various X, Y and Z axes, now-popular simultaneous 5-axis machines place even more of a premium on precise speed and location.

One such example of a machine working within very small guidelines are printed circuit board (PCB) drilling machines—these machines are a relatively new addition to PCB production, having only been in use since the 1990s. Lenz in Germany was the first company to successfully use linear motors in PCB drilling machines. The new configuration, along with the capability to be able to carry out 1,000 drilling operations each minute required linear encoders, HEIDENHAIN’s exposed LIC 4100 absolute encoders specifically.

This encoder helps allow for accurate movement of X, Y and Z axes that are accelerated at staggering rates–the X and Y at almost 2 g and the Z at 3 g. The DRB 610 1 + 1 PCB drilling and milling machine is also capable of up to 50 µm in depth and ±3 µm in positioning accuracy.

New machine tools are the only ones that rely on encoders. In fact, we were lucky to be involved with the rebuild of one of the largest machine tools in the world. It was first commissioned at Major Tool & Machine in Indiana in 1995. Its two X axes measure 740″ and the Y 377″. As part of a recent rebuild, the custom LC 201 absolute linear scales used were among the largest we’ve ever sold in the U.S and are still capable of micron-level accuracy when needed. Watch a time-lapse video of the rebuild below.

We’re just scratching the surface. Encoders are an essential component to these industries and many others like metrology, motor construction, pulp and paper processing, steel, oil and gas to name a few. It’s exciting to have the chance to be involved in some of the important projects detailed here, and to know that HEIDENHAIN measuring devices are helping some of the most important and technologically advanced industries continue to advance. Considering the demands of modern production and computing, the expectation is that encoders will continue to play an important role in human progress going forward.

Looking for an encoder for your next automation project? Use our selector tool to find the encoder that’s suited just right for your industry and application in just a few clicks.