When the needs for an exceptionally high precision positioning system of a compact size is required by a major research university lab, not just any gimbal will do. That is where years of experience by an engineer and custom builder makes way for creativity and new solutions that provide answers from which others can eventually benefit. That’s where Blue Joule Corporation first made a difference for Johns Hopkins University – Applied Physics Lab (JHU-APL).

Answering the call from JHU-APL for a compact gimbal for use as laboratory equipment to allow for extremely precise testing and documenting of their own equipment, Blue Joule has developed and delivered the distinctive Mini Mount (MM) Gimbal. Uniquely made of stainless steel and comprised of a package of pre-integrated highly accurate motion control components from various HEIDENHAIN brands, this gimbal is approximately 20” tall and is tested to be accurate at better/smaller than 1/1000th of a degree. “This is in the top tier in the world of gimbals and designed at lower costs than previously attainable,” explains Neal Romine, owner of Blue Joule Corporation. Over the last 40 years, Romine has worked for such companies as McDonnell Douglas Aircraft and Emerson Electric, as well as served as past owner of Multiple Services Technologies Inc (D.B.A Multitech Corporation) before its 2004 sale to EMS Technologies Inc.

Romine adds that though on the smaller scale in stature, the accuracy level of this positioning gimbal is what is typically used in equipment that tracks aircraft. “In the past, I fulfilled a contract with NASA for a gimbal used for tracking of the space shuttle’s return to flight (RTF) program, so I know,” adds Romine. “I call this newer gimbal for JHU-APL the Mini-Mount (MM) because it’s about half the size of a typical gimbal of these types.”

“The requirement of this gimbal project for Johns Hopkins University was for an extremely high precision positioning system/platform in order to be able to provide high accurate position feedback,” says Romine. “It will likely first be mounted with some sort of optical stabilization equipment for very high-speed photography though the options of course are theirs. Therefore, the selection of the use of the highly accurate AMO absolute encoders (made of a multi-layered stainless-steel ring) that integrated seamlessly with the motors and controller were a critical part of its design.”

The development of the Blue Joule MM gimbal took over a year to complete and provides +/-4 arcsec level accuracy, with sub arcsecond repeatability and 23-bits of resolution. Part of the unique design includes the use of two encoder reader heads that combine with one encoder ring which then eliminates mechanical errors and thus boosts the accuracy levels. “This gimbal provides 23 bits of resolution at an unusually low cost and is extremely rugged. You can spray it down with dirty oil and it just doesn’t care,” says Romine.

The AMO angle encoder used is the combined flange-mounted WMFA ring and two WMKA absolute reader heads which seamlessly communicate with the system using the EnDat 2.2 interface to connect with ETEL TMB+ motors and AccurET 300 drive control. “While other interface options are available, this entire package was chosen because it was made up of all HEIDENHAIN brand components which offered a big risk reduction in implementation,” adds Romine. “That’s not available anywhere else and afforded me the luxury of avoiding a lot of de-bugging that I just didn’t have to do! It’s an extremely high accurate and reliable positioning system.”

The structure of any gimbal is comprised of three main sections: a Riser assembly, an Elevation section, and an Azimuth assembly. The MM is a two-axis (elevation over azimuth) gimbal with each axis powered with an ETEL TMB+ motor. These motors are frameless torque motors capable of up to 66.1 Nm of torque. “This motor was chosen because of its excellent quality and integrated cooling that offers just another level of reliability to the MM gimbal,” adds Romine. 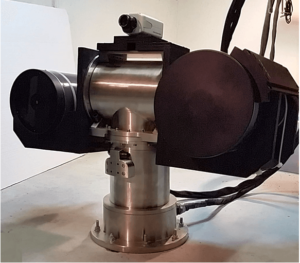 The MM has operational travel range of +/- 155 degrees in Azimuth and +/- 95 degrees in Elevation. These travel limits simplify the mechanical system (increasing its reliability) and include elastomer bumpers.

Romine emphasizes the fact that the MM structure is made of stainless steel that is inherently corrosion resistant and incredibly stiff making this gimbal extremely unique. “In my 40 years in business, I have never seen a gimbal manufactured of stainless steel,” adds Romine.

He adds that aluminum is the usual material used for gimbal development because it is traditionally available at a lower cost, easier to machine and has good thermal transfer but that stainless steel had come down in price and that Blue Joule was able to very closely match thermal characteristics between the bearings and the housings. This is typically a problem that requires a complex manufacturing process. Also, stainless steel is known to be significantly better in terms of durability, payload capacity and performance (stiffness). “Stiffness is paramount in a gimbal,” says Romine. “If you want to hang a heavy payload like a camera or telescope off it, you want to minimize the flexure and make sure that nothing droops. And while it is heavier than aluminum, this was not a concern for JHU-APL.” 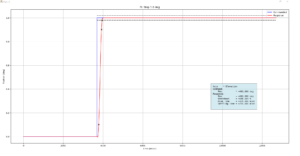 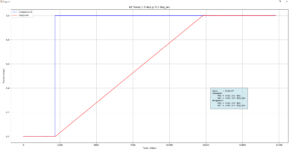 As usual protocol, a host of tests are completed on all new Blue Joule project designs. One example of testing on the MM include on Simple Step and Ramp. Here, Simple Step and Ramp responses of the system showed exceptional performance. The autotuning feature of the ETEL AccurET /ComET controller software allowed quick critically damped tuning. It also allows for intuitive manual tuning for those so inclined. “The auto-tuning in elevation worked so well it almost looks too good,” says Romine.

This new unique gimbal will allow JHU-APL to mount larger heavier payloads in a smaller footprint while operating with higher precision than traditionally available. “Especially for a gimbal of this size and price, the accuracy is exceptional,” shares Romine. “And while very few organizations have needed this level of accuracy (such as big telescopes which do), that is changing. Possible upcoming applications for something like this include tracking and surveillance systems, stabilized platforms and high-level camera mounts to name a few.”