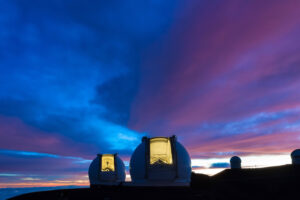 In the middle of the Pacific Ocean, Hawaii Island is surrounded by thousands of miles of thermally stable seas. The 13,796-foot Maunakea mountain summit has no nearby ranges to roil the upper atmosphere, and for most of the year, this atmosphere is clear, calm, and dry, enabling the W. M. Keck Observatory with its twin 10-meter-mirror telescopes to observe our galaxy and beyond at levels special to it since opening in the early ‘90s. Now, after the completion of a significant nine-year motion control upgrade project, the Keck Observatory telescopes, standing 30 meters (almost 100 feet) tall each, are offering data and observations with new and impressive nanometer precision. And all changes were made without experiencing any downtime on either telescope.

“We are now able to blindly point the telescopes to any star in the sky within Keck’s observable area with an accuracy of 1.0 arcsec,” explained Tomas Krasuski, the Lead Electronics Engineer at Keck Observatory who played an important role in the design and implementation of the telescopes upgrade project that began in 2009. “That is an accuracy level of one thirty-six hundredth of a one degree!”

“This along with some of our other new impressive performance numbers are allowing researchers to gather data more accurately and quickly than ever before. New subsystems designed, developed and now completed at Keck have enabled this level of accurate motion control, including the redesigns of our very critical azimuth and elevation systems that incorporate ultra-precise HEIDENHAIN encoders allowing true nanometer-level measurements that we did not have in the early ‘90s.”

The twin Keck Observatory telescopes are the most scientifically productive optical and infrared telescopes in the world. Each telescope weighs over 300 tons and hosts a primary mirror with a 10-meter diameter (32.8 feet). These telescopes are currently the two largest light-collecting mirrors on the planet, operating at impressive nanometer-level precision.

“We are an extremely important resource for researchers interested in many areas of astronomy and astrophysics – including the discovery of exoplanets; the study of how planets, stars and galaxies form; the nature of black holes; and the chemical composition and evolution of the universe,” explained Krasuski.

When Keck Observatory began science operations in the early ‘90s, it was the first generation of very large ground-based optical/infrared telescopes with segmented primary mirrors. The telescopes worked very well utilizing technology available at that time, though after 20 years, some replacement components became hard to find, putting the telescopes at risk in the event of a major failure. Also, the established measurement system included rotary encoders for measurement that were subject to periodic errors. So, following an obsolescence study, the need for renovations became clear.

When Keck Observatory’s Telescope Control System Upgrade (TCSU) project launched in 2009, it set out to not only update the systems but also improve the telescope pointing, tracking, and offsetting performance. Over the next nine years, both the Keck I (K1) and Keck II (K2) telescopes had upgrades done on all major elements including telescope controls, rotator and secondary mirror controls, and safety systems. And due to a switching solution developed and implemented for use between old and new control systems, the TCSU team was able to complete the specialized upgrade work with new components during the day, though at night, the established systems were switched back and still operational.

“TCSU was a complex and challenging project that involved multiple subsystems. Our team decided to upgrade all at the same time instead of consecutively to reduce the need for regression and repeated cross-compatibility testing,” explained Krasuski.

The whole TCSU team was involved: Ean James, Ben McCarney, Kevin Tsubota and Shui Kwok, as well as the summit maintenance crew. “This project would not be possible without the talent and expertise of this team,” said Krasuski. “We faced some tough challenges, but our collective hard work and determination helped us overcome those obstacles.”

At the beginning of the TCSU project, Keck Observatory engineers explained that a significant part of the project was the installation of new telescope azimuth and elevation position encoders based on HEIDENHAIN’s 40-micron grating tape scales. Interpolated to a 10-nanometer resolution with a HEIDENHAIN EIB 749 box, these new ERA 84XX tape encoders (Image 2) promised to provide Keck Observatory true 4 mas (milliarcseconds) resolution in azimuth and 1 mas resolution in elevation. This was a big improvement to Keck Observatory’s position sensing when compared to the old rotary incremental encoders.

“In the end, these new HEIDENHAIN tape encoders performed brilliantly,” explained Krasuski. “Their installation required significant changes to our mechanical infrastructure in order to house them so new designs were developed over time to get it just right.”

“These totally new mechanical designs, plus the fact that it is very difficult to work at high altitude on the summit, made this an especially challenging project. It’s a two-hour ascent from our base to the summit, including spending time at an acclimatization zone, each time someone is required to work there. And things operate differently up there since the atmospheric pressure is about 60 percent of sea level, making cooling systems tougher overall. There are many things to consider.”

This ring has an O.D. of 1.15 meter and could accommodate an off-the-shelf full circle HEIDENHAIN ERA 8400C encoder tape of 3.6 meters in length. This was a viable solution on K1 and K2 because of the existing accessory mirror mounting structure below the moving telescope tube. A connection to the telescope could be made here that would rotate an encoder in azimuth. 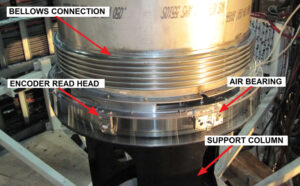 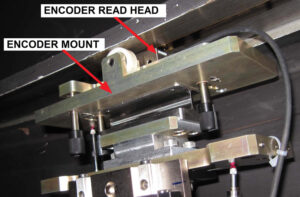 The installation of this new design with optical tape encoders on both telescopes began in 2014 and 2016. This ring and tape were fixed to a top flange of a steel support column. The connection from the encoder read head ring to the telescope structure was accomplished with a thin-wall stainless steel bellows tube that transfers rotational motion of the telescope to the read head rings, without lag, wind-up, hysteresis or vibration.

There are four azimuth encoder read-heads that now move with the telescope (Image 4). The read heads are spaced evenly on a flat ring that floats on the larger (fixed) tape ring by means of frictionless air bearings by New Way. The azimuth bearings, tape and read heads are surrounded by a clear sealed air shroud, except for a 0.5 mm gap where shield meets top flange. Additionally, two tilt meters were installed in this area. “The encoders and the tilt meters are the primary reason for achieving the greatly improved pointing and tracking performance,” explained Krasuski.

A HEIDENHAIN optical tape encoder for the elevation axis was also installed on a bar-code surface on the right-side elevation drive sector of each telescope (Image 5).

Here, two optical read heads were installed on the inside of each main yoke structure near the elevation-drive assembly for this. The tape is installed with distance-coded reference marks toward the primary mirror side of the telescope.

The elevation angular motion is measured by these pair of read heads which are carried on an articulating mechanism. A pair of rollers bears against the surface with 1.5 N of spring force, and a linear stage provides controlled radial motion. This system allows extremely precise raising and lowering of the telescopes (Image 6).

The HEIDENHAIN encoder tapes used in the TCSU systems are incremental encoders with center strip markings evenly spaced at 40 microns. They do not code absolute position until initialized using HEIDENHAIN-provided distance-coded reference marks just below the incremental marks (Image 7).

The way this works is that the encoding software must read three reference marks to initialize position. The three reference marks will contain two evenly spaced marks and one mark that is a distinct number of counts from the other two. The distinct count is used to determine the absolute position, or angle, on the tape to a 40-micron accuracy. Once the absolute position is known, i.e., the reference, then the incremental tape is used as an absolute encoder. ‘We found that this works great,” said Krasuski.

In the end, the TCSU project was able to achieve better performance for the key requirements: telescope pointing, open-loop and closed-loop tracking, and repositioning (offsets).

“This means we can move these giant telescopes anywhere in the sky and have confidence that we’re pointing the telescope on our chosen star with an accuracy of 1.0 arsec,” said Krasuski. “Some field of views have many stars in them, so it is very important for our astronomers, such as planet hunters, to have our telescopes zero in on their target quickly and accurately. This also helps in tracking.”

Krasuski added that Keck Observatory is now able to track up to an elevation of 89 degrees while meeting their tracking accuracy of 0.050 arcsec RMS (root-mean-square). They can track at this accuracy for an extended period of time. “Sometimes a researcher will track a single star for six hours or more!” he said. 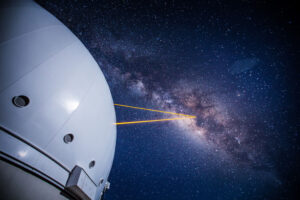 Lastly, repositioning or offsetting refers to small moves of the telescope for the purpose of fine alignment, dithered observing or nodding. At this time, the TCSU implementation outperforms the old system by a factor of 2, translating to improved times and efficiencies. “We are able to reposition the telescope while tracking a star by 1, 5, and 10 arcsec, and still meet our accuracy requirements in <1 second, which is important for observing because scientists frequently need to do this during data collection,” explained Krasuski.

All in all, Keck Observatory now offers an even more exceptional view of the universe than ever before. “These installed encoders work brilliantly well and meet the high standards we had heard and expected from HEIDENHAIN! This is truly where the world of large and small meet,” said Krasuski. “To move these gigantic telescopes to the accuracy of 10 nanometers is absolutely amazing.”