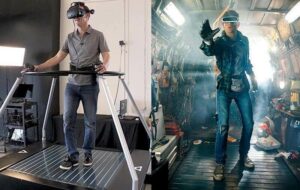 When Infinadeck provided Warner Brothers Studios with their prototype omnidirectional Virtual Reality (VR) treadmill in 2018 for the Stephen Spielberg movie “Ready Player One,” the world’s first and only commercially viable omnidirectional treadmill itself debuted. Allowing the user to walk in any direction on a deck atop a stationery platform, the Infinadeck from California has since begun making its way into many other VR applications, each supported by two HEIDENHAIN rotary encoders as critical internal components. Built on patented technology, the Infinadeck features true 360-degrees locomotion and is revolutionizing true VR immersion.

“Each Infinadeck has two HEIDENHAIN absolute ECI 1118 encoders in its fully closed-loop system,” explained Infinadeck COO Benjamin Freeman. “These are important because they help control the system’s X and Y movements as the encoders provide the system position feedback on each axis. Then with our control loop software, we manage the calculations for the user position on the Infinadeck allowing him/her to naturally walk in any direction. When coupled with a Virtual Reality headset, this really transforms the VR experience.”

Infinadeck has already made its way into some healthcare applications such as for Khymeia’s “Moonwalker” for VR in neurological rehab medicine and cites other possible industries uses on their website. Some of those for Infinadeck include VR in training, research & education, fitness and of course gaming. 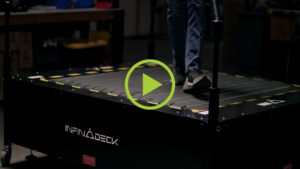 “Our system wouldn’t work without this closed loop system, and we are pleased with how HEIDENHAIN has supported our efforts with both their technological expertise and solid encoder products,” added Freeman. “These HEIDENHAIN encoders provide a high line count, high accuracy and high reliability, all for a low cost that meets our manufacturing requirements.”

HEIDENHAIN’s Business Development Manager of the Automation Division Jonathan Dougherty added “Infinadeck’s platform is ground-breaking for the VR landscape and we are proud to be a part of this exciting motion control endeavor.”

“We are expecting exponential growth over the next few years as we pave the way to true VR immersion and we are looking forward to HEIDENHAIN being right there with us,” added Freeman.