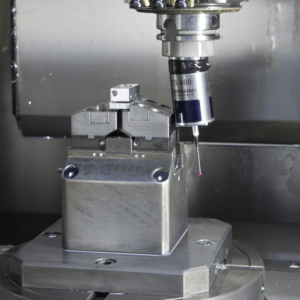 Touch probes are now widely used in the machine tool world.  What is not always known are the advantages that some touch probes can provide as a metrology tool for in-process inspection within those same machine tools.  When used as such, the machinist can add a higher element of accuracy to the process, more functions and eliminate subsequent inspection steps, among other benefits.  All of this can save time and money in the machining process.

This is particularly true within 5-axis machining centers because it is now so easy to locate parts on a worktable or fixture by utilizing tool touch probe cycles. This is often done by aligning the parts via a flat surface or reference holes using a touch probe on the machine and allowing the 5-axis CNC to position the A-B-C axes in a way that the part plane is perfectly perpendicular to the spindle and respectively to the cutting tool.

Another common application for in-process touch probes is the calibration of the 5-axis kinematics in a machining center, assuring a precise movement, and pivoting and positioning of all the axes specifically in full 5-axis applications.

Now, because a touch probe can enable all these very precise measurements in an accurate machine tool, why not go to the next step and use the touch probe as a metrology tool for in-process inspection? Some readers may disagree believing the rule of thumb is to never inspect a part in the machine with which you machined it because you may duplicate the machine movement error (if any) and reflect these errors in the inspection measurements.

This statement is often correct, and a good quality control system often calls for an inspection of the part in the climate-controlled metrology area utilizing a CMM and other metrology-related inspection methods. I argue that every part is designed with a certain tolerance band and if you have a precision 5-axis machine tool with linear glass scales and closed loop measuring system, a machinist can accurately pre-inspect the part within most tolerance bands simply using a touch probe within that machine. This would allow the machinist to reduce inspection time and avoid possible re-machining of the part or fixture after removing it from the clamping device. This can save hours of setup time and reduces machine idle time.

Another advantage of in-process inspection is the automatic compensation of any inaccuracies of the cutting tool. Despite all of the precision that goes into tool manufacturing, radius cutters, in particular, lack a uniform geometry. The actual radius of every single tool typically exhibits distinct deviations from an ideal circular form. Research has shown that deviations of up to 0.015 mm can be expected for a standard tool. Even expensive, high-end precision cutters can have deviations in the micron range. The precision in-process touch probe inspection technique can determine deviations of the machined part in conjunction with a 3-D tool compensation feature of the CNC providing powerful three-dimensional tool radius compensation. In these instances, workpiece accuracy is thereby significantly improved, especially for complex free-form surfaces. More info can be found at www.klartext-portal.com.

HEIDENHAIN’s TS 460 wireless workpiece tool, is one example of a touch probe that is suitable for in-process inspection.

All these measurements cannot be reliably accomplished with an ordinary touch probe. When looking for a touch probe for in-process use, here are three important features to look for:

All in all, the use of touch probes for in-process inspection is growing.