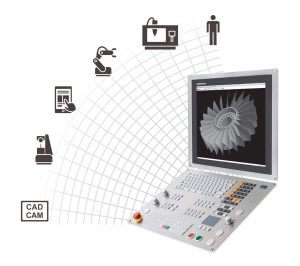 SCHAUMBURG, IL (May 2018) – In order to truly showcase the new age of digital manufacturing, HEIDENHAIN, an international leader in motion control components/systems, will use its control systems during the September IMTS to connect equipment from many machine tool builders throughout the massive exhibition at Chicago’s McCormick Place back to the HEIDENHAIN booth. The list of connected manufacturers is to be announced closer to show time.

“Connecting Systems for Intelligent Production” has been HEIDENHAIN’s motto at many trade shows over the past year as the manufacturing trend of digitization and networking have become the goal for many in order to increase competitiveness. To this end, HEIDENHAIN offers Connected Machining, a package of components and systems to support end users introducing digital order management in their production processes.

At IMTS 2018, this will be demonstrated by HEIDENHAIN in a live presentation at its Connected Machining booth area, including the use of a TNC 640 control on a high precision 5-axis machine tool. HEIDENHAIN’s new StateMonitor software focuses on the evaluation of machine data – that was acquired during the operation of machine tools – by the HEIDENHAIN TNC or other CNC controls with the MTConnect protocol interface. This can also be monitored online utilizing mobile devices via a secure IT structure.

At the show, it will be shown that the use of these systems results in concrete solutions for analyzing and reducing downtimes so that end users can significantly increase competitiveness. HEIDENHAIN will put special emphasis on metal removal rates, productivity and accuracy while supporting the machine operator through full access to manufacturing IT. Five-axis application engineers will be on site explaining the new TNC features and cutting a high precision 5-axis part.

The International Manufacturing Technology Show (IMTS) will be held September 10-15. HEIDENHAIN’s main booth will be located at the Lakeside Center (#135226). HEIDENHAIN will also have a booth at the Student Summit (#215108), allowing students to program on the new TNC 640 CNC with touchscreen interface themselves; here, teachers and students will also get a first look of the new online HIT HEIDENHAIN Interactive Training Software for 3- and 5-axis machine programming.