When using or designing machines for either machine tool or other industries, there are many different types of transmission methods available.  From ball screws and rack and pinion to gearboxes and servos, each transmission method has its pros and cons.

When it comes to the highest end of motion control, one could argue that direct drive technology is the best transmission method available and allows users to achieve maximum performance at the highest precision.  Using electromagnetic induction as its way of transferring force, direct drive technology eliminates many of the downsides of other transmission devices, and is available in both linear and rotational forms.  For rotational movement, a torque motor would deliver this and provides multiple advantages over other methods. 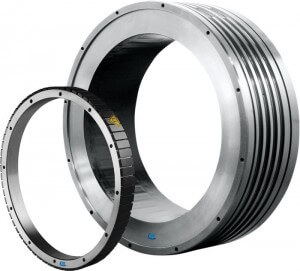 Torque motors themselves only come in two parts:  a magnetic rotor for rotation and a stator to transmit its magnetic energy through its coil windings.  Without the need of gearboxes or other mechanical parts, the motor can be mounted exceptionally close to a moving part allowing the system to be more compact than otherwise possible.  Along with that, the large hollow shaft of a torque motor allows for easy integration of outside components such as cables and cooling tubes.  Even if in the event in which a part breaks, having less pieces to deal with would also simplify maintenance. 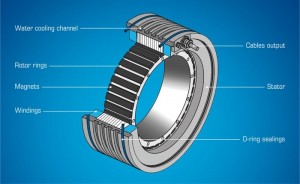 There are only two parts of a Torque motor, a rotor and a stator, with no contact between them.

Reducing the number of mechanical parts also reduces the chance of part failure.  Because the only machine contact is with the bearings, nothing on the motor suffers from any kind of wear or aging. No wear leads to less chance of parts breaking, no loss of performance over time and less time having a machine being non-operational.  All this leads to a lower cost of ownership overtime no matter what type of cycle it is tasked to perform.

As long as the motor isn’t pushed past its force limit or overheated, adjusting the duty cycle of a torque motor is simply a matter of making changes to the controls.  Torque motors are able to easily switch between high torque to high speed motions without any mechanical adjustments.  This versatility in the motor allows it to perform more complex duty cycles and extends its working range as opposed to other methods where parts would need to be changed. 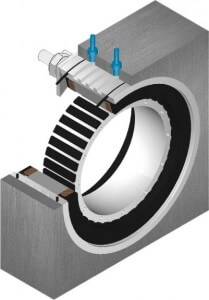 Undoubtedly the biggest advantage of torque motors and direct drive technology is its unmatched performance.  Because all motion is a result of electromagnetic inductance, there is never any case of backlash, mechanical resonance or any inertia disconnect between loads when it comes to the motor itself.  Although they operate under the same principle of servo motors (another type of synchronous motor), their higher pole count leads to being able to achieve a much greater torque both continuously and under stall conditions. This allows whatever part being moved to do so using the stiffest, most precise motions possible and for the motor’s torque power to be used to hold a part in place with minimal give.  The only limitation would lie with either the drives being used or its feedback device when it comes to the precision they can deliver. 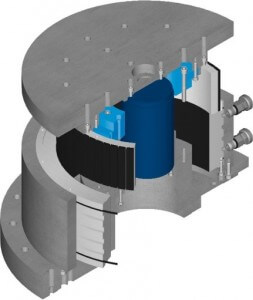 A common application for Torque motors are on indexing tables where the stall torque holds large parts in place.

Torque motors are commonly used in machine tools on their indexing tables.  This is because a torque motor is a low profile addition to an already large machine, and is able to provide a great amount of torque to quickly accelerate and hold large pieces of metal in place.  It does this while positioning at an accuracy that is unmatched by anything that does not use direct drive technology.  This combination of power and precision in torque motors is also used in gear grinding machines where achieving a very particular movement is key.  And when all of its power is not required, the accuracy and small footprint of a torque motor can still be used in the metrology field for providing precise measurements or on tool changers where a mechanical stop wouldn’t be necessary.  Other applications include motion simulators, robot arms and even large telescopes.

Overall, torque motors can deliver a large amount of power within a small package in exactly the same way as other methods, but without as much wear over time and requiring less maintenance.