Few mechanical systems depend on a combination of speed, accuracy and repeatability more than the modern machine tool—especially in the age of multi-axis, CNC machinery and small-part, small-production runs. A metalworking operation is only as strong as its weakest link; one scrapped part not only inflicts added material costs, but also often affects the productivity and schedule of every process downstream from it.

More than maybe any other instrument in a machine tool, encoders ensure the proper combination of speed, accuracy and repeatability by providing positional feedback to the control. In other words, they encode position or movement in a language CNC controls and, in turn, operators can understand.

As a historical leader and innovator of motion control systems and CNC controls, HEIDENHAIN is uniquely positioned to provide solutions to machine builders and upgrades or retrofit options to end users that optimize metalworking performance.

Linear, rotary and angle encoders are used for feedback in CNC machine systems, communicating between the control and the respective motor. Each type of encoder monitors a different motion element of a machine depending on factors like the accuracy required and directional variety. The performance of a machine tool depends heavily on these different encoder instruments providing accurate, synchronized feedback readings.

Angle encoders measure the rotational relationship between two parts with extreme precision, typically of an accuracy better than ±10″ (arcseconds). HEIDENHAIN offers angle encoders with accuracy down to ± .04″ (arcseconds). These extreme levels of precision make angle encoders important in the development of multi-axis centers. Whether moving simultaneously or independently, components like rotary table and swivel head designs often employ this type of encoder.

Similar to angle encoders, rotary encoders measure rotation. They are, however, not as precise as angle encoders, typically relaying accuracy above ±10″ (arcseconds). While angle encoders excel at positioning, rotary encoders are often more suited for speed control. In the machine tool industry, this makes them ideal for monitoring spindle rotation per minute (RPM). This metric is essential to understanding and optimizing cost-critical factors like speed/feed, tool wear and energy consumption.

How rotary and angle encoders work with servo motors

More traditional—and still very popular—3-axis machine centers and lathes employ servo motors to move tables (typically the workpiece) and spindles along their linear X, Y and Z axes. The motor turns a screw-like rotor shaft along which the table or spindle moves; the encoder communicates the speed and distance of the movement.

During long production runs or sharp transitions to and from roughing and finishing operations, reversal errors or axial drift due to thermal expansion can occur; since rotary and angle encoders cannot account for axial deformation, which can result in out-of-spec parts, these scenarios are where linear encoders are effective.

Naturally, this kind of encoder measures straight-line distance. In machine tool applications, positioning is a much more important consideration than speed, since loads are typically being moved such short distances. Another distinction is between exposed and enclosed encoders. But the enclosed option is the only choice for the extreme conditions in a machining center’s work area. Its sealed unit is mounted on a small carriage that’s connected directly to the machine slide, moving with the table, protecting its sensitive scales and scanning instruments from chips and coolant and feeding precise location to the control.

There are a few fundamental ways that an encoder recognizes and communicates positioning and speed. Fundamentally, encoders use the relationship between variations on a stationary disc or scale and one that moves with the load. There are two primary marking patterns, or graduations, are called incremental or absolute.

Absolute encoders have scales or wheels with more nuanced markings or variations for the scanning mechanism to read. Absolute encoders do not require a main reference point. In other words, immediately upon powering on a machine, specific positioning is acquired and recognized by the control. With absolute encoders, there is no need to zero out a spindle head or work table before beginning work.

Incremental encoders function in the same fundamental way as absolute encoders, but instead of unique markings that can communicate an exact positioning, more uniform gratings communicate a relative position. Reference marks throughout the pattern establish absolute position. As a result, machine elements that use this kind of encoder need to establish zero points before work can begin.

The fundamentals of encoders remain, measuring rotational and linear movement and position, but how they are being applied is changing. As modern market demands intensify pressure on manufacturers to find efficient ways to produce complex parts, industrial processes advance. Encoders and their applications are evolving to overcome some of the challenges. 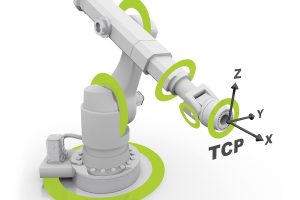 Accuracy demands for robots used for widespread applications like welding, pick-and-place or vehicle assembly are minimal. Robotic machining, however, is common in the aerospace industry because large components like aircraft fuselage cannot be machined in the confines of a traditional center. This has historically been a challenge because the tool at the end of an articulated robotic arm (the center point) must be positioned with extreme precision. Adding to the challenge is the fact that these often involve six axes.

The addition of secondary encoders, such as the HEIDENHAIN ECA 4000 with optical scanning and the HEIDENHAIN ECI 4000 rotary encoder with inductive scanning, mounted after each gear train can capture the absolute position of every joint. This can help account for zero position error and backlash that lead to imprecision.

Calibration of machine tools is critical to the machining of high precision parts used in the watch and optical industries, for example. To ensure machine performance, calibration equipment has evolved, including the emergence of grid encoders that mount directly to the work table for contact-free measurement of machine dynamics. For example, the HEIDENHAIN KGM 282 measures to ±1 µm in X and Y directions providing small signal periods of 4 µm.

There are several factors impacting industrial safety considerations: faster, more powerful and flexible machines, predictable uptime and regulation to name a few. As a result, functional safety is of growing importance to machine tool construction and acquisition. There is a specific class of encoders specifically for safety-related applications, capable of being applied in accordance with SIL 2 (as per EN 61 508) or performance level “d” (as per EN ISO 13849) in conjunction with a safe control system. These encoders are uniquely equipped for uniform and preventative diagnostics as well as safe mechanical connection.

Encoders have a profound impact on machining equipment. The type of encoder installed affects nearly every key factor in a machining process: Accuracy and speed, safety and setup, usability and cost. Encoders are also playing a key role in important technological advances. Understanding the nuance between the different styles of encoders and possible applications is of the utmost importance to both building and purchasing effective machining equipment.