Factory hall = Work envelope. This simple equation is probably the best way to describe the huge 5-axis portal milling machine at the Tamsen Maritim shipyard. Installed nearly 20 years ago, one of the two portals has now been given a comprehensive retrofit, including a HEIDENHAIN TNC 640.

The mobile stand for the new TNC 640 gives the user full mobility within the huge hall.

“In terms of enclosed space, our machine is the largest 5-axis CNC milling machine in Europe,” says Jörg Wicklein, head of Design at Tamsen Maritim in Rostock, Germany, as he proudly describes the impressive structure made up of two portals floating through the huge shipyard hall at a height of nearly 10 m. 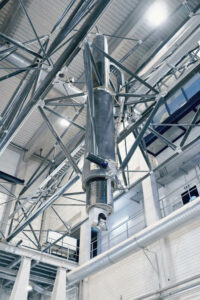 Thanks to their slender carbon lattice structure, each of the gantries weighs only 3 t, with a traversing range of 65 m in the X axis and 12.5 in the Y axis. The portals split the maximum machining height of 7 m: Portal 1, where the retrofit took place, services the lower machining heights from 1 m to 4 m, while Portal 2 machines the upper heights. The two height ranges overlap for 1.5 m. “We can’t attain the complete height of 7 m with a single portal because of the required spindle traversing ranges,” says Jörg Möller, the user of this enormous machine, explaining the two-portal solution. For smaller parts, there is therefore also a 4 m high machining table, on which workpieces can be placed within the overlapping range of the two portals for simultaneous machining.

A major wish: getting closer to the point of machining 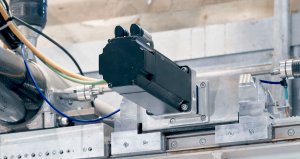 Also part of the retrofit: the portal’s motors.

Möller also had many wishes for the planned retrofit. For despite its size, the machine is mainly operated by him alone. Additional colleagues provide assistance only on projects that require machining across multiple shifts. “Flexibility was very important to me. When using the control, I like to be as close as possible to the actual point of machining,” says Möller, describing one of his most important requirements.

For this purpose, the TNC 640 is operated on a movable stand and is connected to the control cabinet located halfway down the hall by 100 m long cables. As a result, Möller can go anywhere in the hall with the control. If necessary, he even hangs it from a crane in order to move it to a platform or place it on the workpiece. “I now also have a wireless handwheel, which saves me a lot of legwork and often the need for a second man because it allows me to control numerous functions during setup,” he says, pleased with new the capabilities. After all, “There is nothing better than an unobstructed view of the workpiece.”

The vast hall dwarfs the TEDI technician team as they set up the control.

The control wasn’t the only component replaced during the retrofit; the retrofit team from the HEIDENHAIN agency TEDI also replaced the four motors that move the portal, as well as the way in which the motors act on the gear rack—a design developed by Tamsen Maritim itself.

A third bearing was also installed for each carriage, thus ensuring considerably smoother motion and permitting adjustment of the contact pressure between the drive belt and the gear rack, as well as allowing the individual motors to be mutually tensioned. “The belt is now in better contact with the gear rack, resulting in less play,” says Wicklein, explaining the reason for the measures. “Even though the accuracy requirements in shipbuilding and large-part construction are not the highest, our post-retrofit goal was a machine accuracy of 0.3 mm to 0.4 mm over a machining length of 80 m.”

However, mechanical modifications are not the only factors in achieving this. Following the retrofit, the entire machine will be measured by the Fraunhofer Institut for the creation of compensation tables. This is because the extremely long guide rails are not absolutely straight, and the huge portal also exhibits a certain amount of sag. All of these factors will be measured in order to be compensated for by the control, which is one of the strengths of the TNC 640 with its KinematicsOpt and KinematicsComp functionality. “It was precisely these compensation calculations that pushed the old control system to its limits,“ reports Möller. “It simply lacked the computing power, which took a noticeable toll on performance.”

Ready to receive: high above the ground, the receiver for the touch probe is attached to the spindle.

Despite these noticeable limitations, Tamsen Maritim initially decided to convert only one of the portals. “There were three key reasons for this,” explains Wicklein: “Firstly, we didn’t want to completely shut down the plant for the duration of the retrofit. Secondly, no one at our company had experience with such an extensive project, so we wanted to wait for the outcome of optimizing the first portal. And thirdly, a retrofit like this incurs enormous costs, which we wanted to avoid for two portals at the same time.” Wicklein can hardly wait to complete the project: “The Fraunhofer Institute is already in the starting blocks to measure the system.” Wicklein won’t have to wait much longer: the technicians from TEDI are already configuring the axes on the new control and tuning the spindle.

What the portal milling machine produces

Tamsen Maritim predominantly uses its enormous machine to manufacture master models and master molds for large plastic components, including 35 m long wind turbine blades and ship hulls. More than one of the huge, predominantly rigid-foam workpieces are often machined in the hall simultaneously. From Rostock, the master models and prototypes are then shipped throughout the world, including to Asia and the U.S. The sheer size of these parts makes not only their production but also the shipping logistics a challenge for Tamsen Maritim. As a shipyard, the company can use its location on the water to its advantage.

Your partners for a retrofit: www.heidenhain.com/service/partners