Home Maximum Precision for a New View of the Universe

Maximum Precision for a New View of the Universe

Angle encoders from HEIDENHAIN for the world’s most powerful telescope 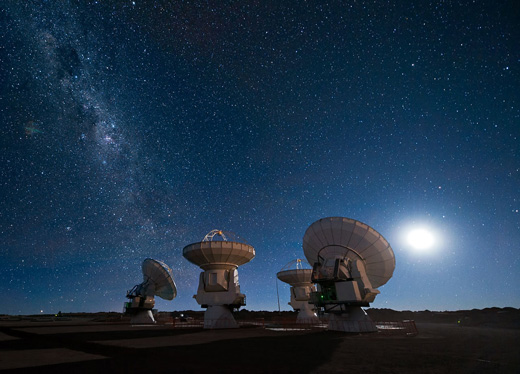 ALMA does not use one single antenna for observation purposes but rather 66 receivers, precisely controlled and interconnected to form a giant telescope. Exact positioning of the antennas weighing several tons is of decisive importance, and this is ensured by angle encoders from HEIDENHAIN among other factors.
Source: Photo credits: ESO/José Francisco Salgado (josefrancisco.org)

The international ALMA project is a source of prestige for all those involved. Although the observatory is to be completed in 2013, it was already supplying breathtaking images from the depths of the universe on October 3, 2011. 25 of 66 antennas are from Europe, and equipped with angle encoders from HEIDENHAIN. It is this alone that makes precise positioning of the antennas possible, each weighing several tons, as maximum precision is needed for next-generation astronomical observations.

The ALMA observatory in the Atacama Desert in northern Chile is the most powerful radio telescope in the world, and the world’s most complex terrestrial observatory. With ALMA, short for “Atacama Large Millimeter/Submillimeter Array,” astronomers aim to investigate remote galaxies and search for the building blocks of solar systems and inhabitable planets. Construction of the observatory is not yet complete, yet the unexpectedly high level of precision has caused furor throughout the world.

Until now around a third of the 66 radio antennas planned have been set up on the desert plateau at a height of 5,000 meters. ALMA does not use one single antenna to observe the cosmos but several receivers positioned precisely and interconnected to become a single telescope. Alma Correlator, one of the most rapid specialized supercomputers in the world, calculates the image data of the antennas to produce a general overall view.

Pinpoint accuracy, light years away
The coupling of the antennas to produce a giant telescope enables ALMA to capture images of celestial bodies at a distance of many millions of light years. Exact positioning of the antennas weighing several tons is of elementary importance, and the slightest imprecision distorts the result and lead to blurred images.

A decision was taken by those responsible for the 25 European radio antennas to order angle encoders from HEIDENHAIN. The company from Traunreut in Upper Bavaria, Germany has been developing angle encoders for almost 60 years and is thus a pioneer in this sector. With outstanding measurement precision and a high level of long-term stability, these devices ensure the required accuracy for alignment of the ALMA antennas.

A special strength of the HEIDENHAIN angle encoders used in the project is outstanding precision within one signal period. They function without contact and are thus especially suitable for use in precision devices.

Precise measurement of horizontal and vertical angles
To align the horizontal angle (azimuth) with precision, the European ALMA antennas use the new incremental ERA 7480C angle encoder with 247,800 scale lines and a diameter of 3155 millimeters. The ERA 7480C was specifically developed for use with the ALMA and the tape length was adapted precisely according to the required diameter. Achievable precision was simulated beforehand as a part of project development. The ERA 7000 angle encoders consist of a scanning unit and a one-piece steel scale tape as graduation carrier.

The vertical angle (elevation) is set by the researchers in Chile with the aid of the ERA 4282C angle encoder from HEIDENHAIN. The especially precise angle encoder of the ERA 4000 series with steel scale drum has 32,786 scale lines and a diameter of 209 millimeters.

The interface electronics from HEIDENHAIN adapt the encoder signals to the interface of the subsequent electronics. The new external EIB 749 interface box interpolates and compensates the output signals from the scanning head, and position values are output via Ethernet to the antenna’s control computer.

With extensive experience and expertise in the development and manufacture of measuring devices and numerical controls, HEIDENHAIN creates the groundwork for the automation of tomorrow’s plants and production machines.

Schematic representation of a circular graduation with distance-coded reference marks
(ERA 4480 with 20,000 lines as example)

ERA 7480 and ERA 4282 angle encoders
The ERA 7480C angle encoder consists of a scanning unit and a one-piece steel scale tape as graduation carrier. The steel scale tape is supplied by HEIDENHAIN as standard to a length of 30 meters and significantly longer on request. Circle segments are available in applications with no full circle or if measurement is not required over 360°. The ERA 4282C modular encoder consists of a scale drum and a highly compact scanning head.