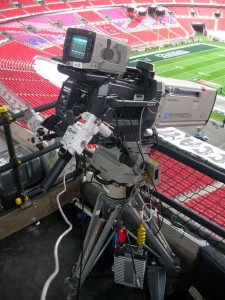 Did you know that HEIDENHAIN ERN series encoders are used to position lenses in many of those large, high quality television cameras used in professional sports? Sportvision, Inc., well known for their virtual Yellow 1st and Ten™ Line seen when viewing NFL football, uses HEIDENHAIN encoders to ensure accurate implementation of that process – and more – within the cameras.

“We have enhanced probably 200 lenses throughout the country with HEIDENHAIN’s encoders,” explained Rand Pendleton, Senior Scientist and Advisor in Sportvision’s Mountain View, CA location. “Besides our Yellow Line for football, our camera modifications facilitate all kinds of virtual effects including adding a lead-off line or the K-zone™ pitch effect in baseball, a “Glowing Puck” for NHL or putting a pointer to a car in NASCAR.”

Sportvision is a leading innovator of digital sports content and broadcast enhancements, producing digital content and live TV enhancements on over 3,000 live events all over the world. “We are in the business to provide visual enhancements to sporting events in order to bring better appreciation to the game for the fans.”

Pendleton estimates that each television camera modified by Sportvision contains a $50,000 – $100,000 glass lens, and that their alterations allow the operator to do effects at every video frame, where they know the state of the lens, and basically where the camera is, where it is pointed, and what the field-of-view is. “From there, we can do our magic, from going from 2D to 3D or back.”

He explains that the modifications with the HEIDENHAIN encoders came at the same time of HD technology and the necessity to be more precise. The key parameter of the lens is the accuracy of the field-of-view “which is why we mount the HEIDENHAIN encoders on an internal shaft in the lens that is mechanically adjusting the telescoping lens element inside the larger lens body.

“If it is an HD lens, it will have the HEIDENHAIN encoder in it,” said Pendleton, “and one that is performing well since once it’s in, we don’t even have to think about it. Then as part of every pre-game process, each lens is calibrated to go from encoder count to actual angular field of view, and thus the magic begins.”