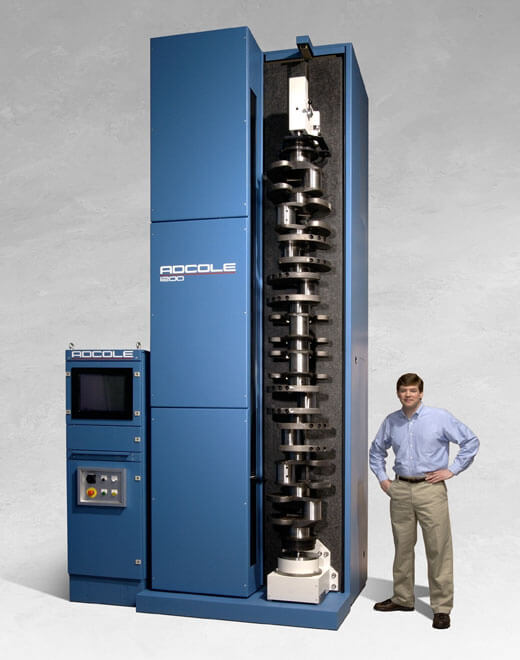 Adcole is celebrating its 52nd year in business. “We go way back with HEIDENHAIN,” said founding father Addison Cole. “In the late 60s, I had a relationship with the late Dr. Heidenhain himself, including visiting the company plants in Traunreut, Germany. He was an impressive man, and we held similar interests including a profound belief in the ability to provide highly accurate measurement systems. We have now been using HEIDENHAIN reticles and encoders for approximately three decades.”

Currently Adcole is using HEIDENHAIN’s ERA 4280 angle encoder in its ultra-precise rotary table headstock, a key component of its laser interferometer-based Model 1200. Combining sub-arc second rotary measurements with nanometer-level linear measurements allows Adcole’s customers to measure roundness, diameter and other critical parameters on crankshafts and camshafts to accuracies of less then 0.25 microns. “The ERA 4280 has an angle accuracy of ±2.5 arc seconds, which is about 2 to 3 times better than our previous design, and makes it easier for us to calibrate the encoder to a fraction of an arc second,” said Corrado. “It was significantly less expensive to purchase the encoder and read heads as an assembly from HEIDENHAIN than do it ourselves. Plus the ERA 4280 encoder is steel instead of glass, which substantially increases the ruggedness of our design. This is particularly important when loading heavy crankshafts (such as one shown in photo).”

Since the 1990s, Adcole has also been using HEIDENHAIN linear scales as well to measure radius on its line of camshaft measuring machines. Adcole made this decision because the HEIDENHAIN scale assemblies were less expensive to incorporate into the Adcole gages than Adcole’s earlier designs. HEIDENHAIN’s model LIP 481s are Adcole’s current linear scales of choice as they are well known as high quality exposed linear scales characterized by small measuring steps together with high accuracy for ultra-precision machines.