The Sun. It seems nearly close enough to touch and ensures that life on Earth grows and flourishes. Nevertheless, we know surprisingly little about what goes on inside this star. Solar researchers want to change that dilemma with the new DKIST solar telescope in Hawaii. The Leibniz Institute for Solar Physics in Freiburg, Germany (formerly the Kiepenheuer Institute for Solar Physics), has developed a visible tunable filter for the DKIST. The filter adjustment is controlled by HEIDENHAIN linear encoders with an accuracy down to under one nanometer. 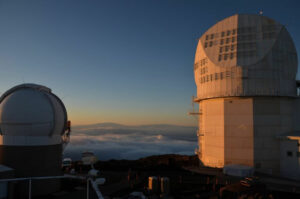 The DKIST solar telescope is being completed at an altitude of over 3000 m atop Haleakalā, the highest mountain on the Hawaiian island of Maui (photo: Dr. Michael Sigwarth, KIS).

Details visible for the first time

Current solar research capabilities are limited. Up to now, we have been able to observe only accrued changes on the Sun, with solar researchers unable to identify details. The DKIST in Hawaii is about to change this. With a mirror diameter of 4 m, it will be the largest solar telescope in the world, providing a high-resolution view of solar surface structures as small as 20 km in size.

A simple example illustrates the enormous optical performance needed for this view of the Sun’s surface: looking from Earth at solar surface structures 20 km in size is comparable to reading a newspaper from 40 km away. With the DKIST telescope, the solar researchers could read this edition of Klartext in the port kiosk at Dover from across the English Channel in Calais! 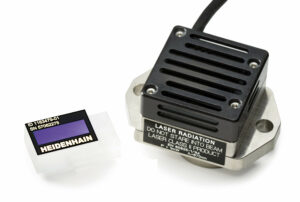 The Visible Tunable Filter (VTF) developed at the Leibniz Institute for Solar Physics (KIS) in Freiburg will enable the examination of precisely defined, very narrow wavelength bands of light radiated from the Sun’s surface. With this, solar researchers can glean information about plasma temperature, pressure ratios, magnetic field strengths, plasma movements, and more on the Sun’s surface, as well as acquire data about changes in its magnetic field.

In principle, the design of the VTF is quite simple. Sunlight is guided through an air gap between two coated, semitransparent glass plates. The repeatedly reflected light within the air gap creates interference, thereby filtering out certain wavelengths. The specific spectral range filtered out depends on the width of the air gap and thus on the distance between the glass plates. 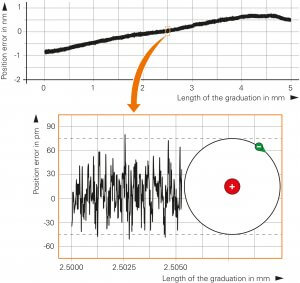 Accuracy of the graduation relative to the size of a hydrogen atom: the accuracy over a traversing distance of 5 µm is critical.

Accurate selection of a wavelength requires highly accurate and perfectly parallel positioning of the two plates. But researches don’t want to study only one wavelength all of the time. Much more interesting are the changes between the different wavelengths, which is why the plates are continuously in motion.

Accuracy down to atomic dimensions

What seems so simple on paper demands maximum performance from the measuring system to be used. In order to repeatedly obtain the required positioning accuracy for each step, measuring steps of 20 pm are required. In addition, the measurement errors must not exceed a total of 100 pm over the course of an hour. Dimensions on this scale are equivalent to the diameters of atoms. By way of comparison: 120 pm is the commonly stated size of a hydrogen atom.

“The crux of the whole setup is the distance measurement,” confirms Dipl. Ing. (FH) Clemens Halbgewachs from the KIS, explaining: “We initially determined the position of the upper plate with only three linear encoders. Unfortunately, we weren’t satisfied at all with the accuracy. So we searched for and found the causes. A temperature deviation of just one hundredth of a single degree Celsius affects the position of the lower plate.” The solution is now a total of six HEIDENHAIN LIP 382 linear encoders featuring a standard scanning head and customized scale, with three encoders on the lower plate and three on the upper one.

Getting there step by step

The development and manufacture of these special scales for the VTF required expertise from many fields stretching all the way into the R&D and Production departments at HEIDENHAIN. A new and enhanced dividing engine met the necessary conditions for the KIS requirements. Even so, the accuracy of the machine had to be pushed to extremes by all available means, thus posing a unique challenge to staff members, who nevertheless mastered it with creativity. 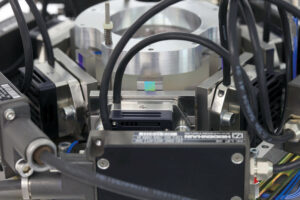 Encoders on all sides: six HEIDENHAIN linear encoders surround the glass plates of the filter.