With ADS Online the function and performance of the encoder are read in real time. This is done quickly and directly on your computer monitor.

ADS ONLINE is Leine & Linde’s diagnostic system for encoders. The product had its world premiere at the SPS Drives trade fair in Nuremberg last November. During the winter, Joel Zachrisson has been responsible for the introduction of the product. He is product manager for the Motion Control market segment, which includes electric motors and generators where encoders are used. ADS Online is tailored for these applications, especially for use in heavy industry such as paper mills, steel mills and wind power. Encoders are used here for speed control on advanced machinery where high demands are made on reliability. “The ADS Online concept has been very well received by our customers. We have spoken to many people who come into daily contact with our encoders, such as end users at paper mills and steel mills. They realize the value of a diagnostic system where it is easy to determine the status of an encoder,” says Joel Zachrisson.

Increased user-friendliness ADS Online is a further development of Leine & Linde’s diagnostic system ADS. Many of the end users are therefore used to the concept of self-diagnosing encoders. “Over the years our existing ADS users have put forward many good ideas and feature requests which we needed to develop. With the new ADS Online many of these ideas have become reality and it is therefore great fun to 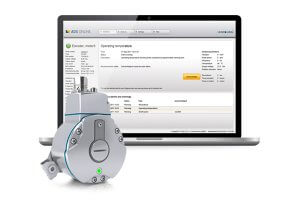 go out and show what the new product can do,” says Joel Zachrisson.  One of the main objectives of the development of ADS Online has been increased user-friendliness – information must be easy to access and easy to interpret.  “If there is a problem in the machine where the encoder is installed it may be difﬁcult to troubleshoot. A typical encoder is like a black box, it is impossible to know whether the fault has occurred inside the encoder or somewhere else in the system, e.g. with a signal transfer. We see this not least in our complaints department, most encoders that are returned to us are fully functioning.  Using ADS Online you can investigate the black box and see whether it is the encoder that is the problem or not. “A green LED indicates that it is functioning correctly, and you should troubleshoot elsewhere. However, if the LED ﬂashes it is an indication that the encoder is malfunctioning. 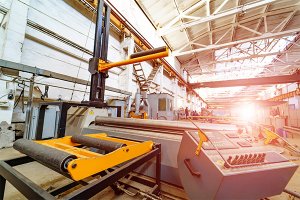 LED shows the status level ADS Online groups each nonconformity in one of four status levels depending on its severity. Just by looking at the physical LED it is possible to see which of the four status levels that apply – recommended measures are also given for each level, which indicate whether the encoder needs to be replaced or not. The associated PC software is connected for a more detailed analysis of the fault. “The PC software is perhaps the clearest example of increased user friendliness. The software allows you to read live data regarding the encoder’s surrounding environment, such as temperature and vibration. In addition, each encoder has an integrated database containing operating data shown on detailed graphs. It provides an opportunity to analyze the operating environment that the encoder has been subjected to during its lifetime, which is of great value if you want to understand the machine where the encoder is ﬁtted. 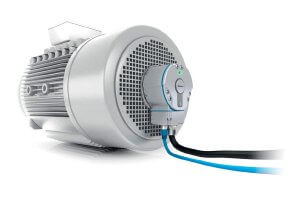 The idea of ADS Online is of course that the connection really is just online, that is, with the diagnostics connected to a network. Consequently, all communication between the encoder and software takes place via Ethernet. However, the software can also be used as a service tool for connecting point-to-point to the encoder. “It’s important that it is straightforward to connect the PC software when you need detailed data. We have solved this by an extra connector dedicated for PC communications. Using this, it is easy to connect the software directly while the machine is operational. ADS Online represents an immense technological leap compared with before, but the key point is that the advanced diagnostics have become more accessible for the user,” says Joel Zachrisson.

Read the encoder’s status directly while the machine is running. Multiple channels for information provide ﬂexibility for each application.

With ADS Online the function and performance of the encoder are read in real time. This is done quickly and directly on your computer monitor. ADS ONLINE is Leine & Linde’s diagnostic system for encoders. The product had its world premiere at the SPS Drives trade fair in Nuremberg last November. During the winter, Joel […]

Safety is the number one priority for ABB – and the productivity of their clients is the reason for their existence. This is perhaps not so strange, as the company – with its 135,000 employees – supplies products and systems for power transmission as well as process and industrial automation worldwide. Process Industries, located in […]

Process control and safety with the FSI 800 series

The drive system is the heart of a paper machine. At Smurfit Kappa Piteå, Leine&Linde’s encoders have provided stable and dependable speed feedback to drive systems for more than 30 years. During the most recent update of the drive system for Paper Machine 1, Leine&Linde’s safety-certified encoder FSI 862 was installed. SMURFIT KAPPA Piteå is […]